Jane Howard, CEO, Ulster Bank has assumed the role of IoB President following the organisation’s AGM on 2 March. She is the 101st President to be elected by Council. Jane replaces Clive Bellows of Northern Trust who steps down following his year in office. 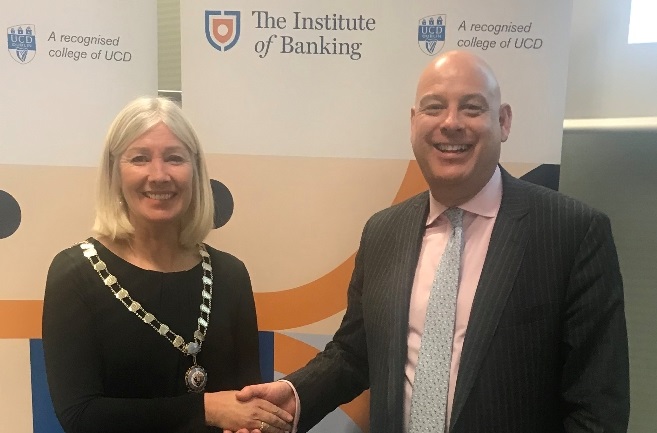 In her inaugural address, Jane Howard highlighted the key areas of focus for her tenure saying “I’m really excited to be taking over the Presidency as we complete a fantastic new value proposition for our members both individual and corporate. My first priority is to oversee the continuing implementation of IoB’s strategic plan and business transformation programme.”

In the next 12 months, IoB plans to launch a highly innovative digitally enabled education and lifelong learning experience for members which, alongside its blockchain-based EdQ verification platform, will be delivered through a smartphone app and IoB’s website and member portal.

Jane continued: “The financial system plays a critical role in our economic model and can significantly influence sustainable development through the redirection of capital flow towards sustainable investment. Sustainable finance is high on IoB’s agenda and we are well advanced in developing a new qualification in responsible and sustainable finance. As President, I will strongly endorse IoB’s initiative and the launch of this new programme.”